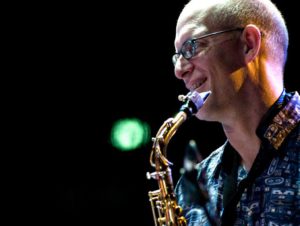 Michael Moore was born and raised in Eureka, California, the son of a semi-professional musician. He studied music at Humboldt State and in 1977 graduated from the New England Conservatory of Music, where he studied with Jaki Byard and Gunther Schuller, and was a classmate of Marty Ehrlich’s. Moore played in a wide variety of musical contexts – especially those in support of theatre and dance groups. By 1982 he was a regular member of Misha Mengelberg’s Instant Composers Pool and had relocated to Amsterdam. He remains active in ICP to this day. He also was member of Georg Gräwes Grubenklang Orchester.
Aside from ICP, Moore is perhaps best known as one-third of the Clusone 3 (aka Trio Clusone and Clusone Trio), along with cellist Ernst Reijseger and drummer Han Bennink. Originally meant only to play a single date at a festival in Clusone, Italy, the trio toured irregularly for several years and recorded six CDs, including one of freely-interpreted Irving Berlin compositions.
Moore’s first recording as a leader was in 1992 but it was with 1994’s Chicoutimi that he began to earn serious recognition as a composer. The drummerless trio on this CD (Fred Hersch, piano, and Mark Helias, bass) was inspired by the duo recordings of Lee Konitz and Gil Evans, and recalls in places the legendary Jimmy Giuffre trios of the early 1960s.
Moore continues to play in a very wide variety of musical contexts. Another group in which he plays – Jewels and Binoculars, a collective trio with bassist Lindsey Horner and drummer Michael Vatcher – is devoted to interpretations of Bob Dylan songs.
In 1986, Moore won the VPRO/Boy Edgar Award, regarded as the most prestigious jazz award in the Netherlands. In 1991, he founded Ramboy records to document his music. The label had 22 releases as of August 2006.
Moore started his Jazz Quintet in 2005. In this quintet, Moore pairs himself with accomplished Dutch players: trumpeter Eric Vloeimans, pianist Marc van Roon, bassist Paul Berner, and drummer Owen Hart, Jr. In October 2005, the Quintet recorded the album Osiris.