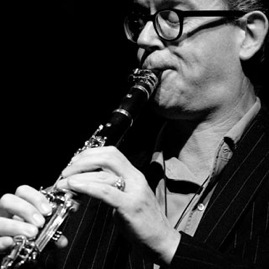 Dutch musician-composer and bandleader Ab Baars (1955) performs on tenor saxophone, clarinet and shakuhachi. He focuses mainly on Ab Baars Solo, Baars-Buis, Fish Scale Sunrise, Perch Hen Brock & Rain, Ab Baars Trio, Duo Baars-Henneman and the ICP Orchestra. In reviews, Baars’ music has been characterized as joyfully obstinate, but surely appealing and as colourful as it is astonishing. It embodies the best typically Dutch improvised music has to offer. Although he seldomly uses recognizable song forms or ongoing swing rhythms, the music stays catchy, because it is stripped to the essence and clearly presented.

Influenced by the American saxophonist Roscoe Mitchell, whom he worked with in 1986, and by his participation in the Monk Project (performed by the Instant Composers Pool, directed by Misha Mengelberg), Baars adopted a very personal style, or ‘ab music’ as Misha Mengelberg calls it.

At the age of 15, Ab Baars began playing the saxophone in the Philips Marching Band and other local bands in the city of Eindhoven in the Netherlands. From 1976 to 1981, he studied saxophone with Leo van Oostrom at the Rotterdam Conservatory of Music. He was granted a scholarship by the Dutch Ministry of Culture in 1989 to study with clarinettist-composer John Carter in Los Angeles. That same year Baars was presented with the prestigious Boy Edgar Award. In 2005, Baars set out playing the shakuhachi (a Japanese end-blown bamboo flute) and took lessons with Kees Kort, Christopher Blasdel and Takeo Yamashiro.